Things You Didn’t Know About Hyenas

One of our favorite species to spot when on safari, hyenas have garnered a bad reputation as inferior scavengers of the savannah.

We have created a list of interesting hyena facts about one of the most misunderstood animals in Africa.

Mind-Blowing Facts about Hyenas to Impress your Safari Group

A hyena’s “laughter” is actually a form of communication used to convey frustration, excitement, or fear. Most often, you’ll hear this unique vocalization during a hunt or when the animals are feeding on prey as a group.

Hyenas aren’t the janitors of the Serengeti, those that clean up scraps from lion kills. Sure, they are opportunistic, but hyenas are first and foremost cunning hunters, killing roughly 95% of their food. Using bone-crushing jawbones, hyenas work in groups to take down large mammals: buffalo, wildebeest, and zebra. In less than half an hour a pack of hyenas can attack and eat an entire zebra, bones in all.

Hyenas and lions are enemies of the bush and often fight over the same territories and hunt the same prey. This leads to competition between the two species. They steal each other’s food and kill the pups of their enemies. And this is for all Cats.

5 – As Socially Complex as Primates 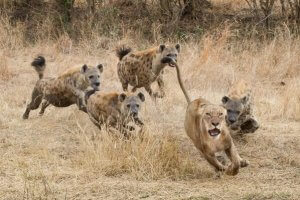 Cartoons have depicted the hyena as dumb and crude, but this mere projection. Hyenas are actually one of the most intelligent and socially complex mammals in the world; they are able to solve equally challenging cognitive puzzles.

Whenever you spot a hyena in the Serengeti, your first thought should always be: that’s an animal dominated by female power. For hyenas, the women are in charge. They are more muscular, more aggressive and ten times heavier on average with triple the testosterone level of their male counterparts. For both male and female, their reproductive parts exist externally and they look very similar.

Female hyenas have only two nipples; therefore, cubs are forced to fight for food from the others, often leading to death.  60% of hyena cubs die before reaching adulthood.

In fact, hyenas are more closely related to cats. As the most common carnivore in Africa, hyenas are actually part of a sub-group Feliformia, a classification for cat-like carnivores.