The Lemosho route is one of the newer routes on the mountain, and a superb choice for your climb. Is widely considered to be the best route on Mount Kilimanjaro. Not too long ago, there were only two main routes used to climb Kilimanjaro – the Marangu (Coca Cola) route and the Machame (Whiskey) route. But as Tanzania’s tourism industry flourished, the Kilimanjaro park authority created more trails to African’s highest peak. It is our preferred route due to its ideal balance of low traffic, beautiful scenery and a high summit success rate. 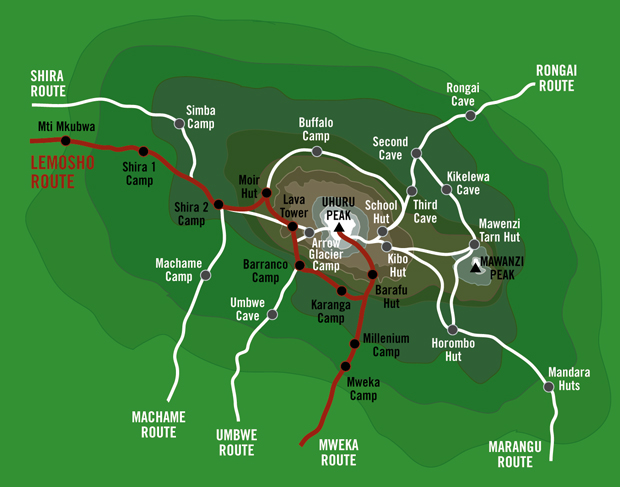 The route approaches Mount Kilimanjaro from the west, beginning with a long drive from Moshi to Londorossi Gate. From there, the first two days are spent trekking through the rainforest to Shira Ridge.

Unlike the popular Machame route, which simply intersects the Shira Plateau, the Lemosho route crosses the entirety of the plain from west to east in a pleasant, relatively flat hike. An added bonus is that climbers will encounter low traffic until the route joins the Machame route.

Afterwards, Lemosho follows the same route through Lava Tower, Barranco and Barafu, known as the southern circuit. Descent is made via the Mweka route.

The Lemosho route can be done in as little as six days (five nights) on the mountain. However, it is ideally tackled over eight days (seven nights) for a better altitude acclimatization schedule. The trek begins at Londorossi Gate, located in the western base of mountain, within its lush, fertile rainforest. The route heads across the Shira Plateau, before circling along the southern circuit halfway around the mountain, exposing the climber to great views from all angles. The approach to the summit is made from the east, and the descent follows the Mweka trail. With eight days (seven nights) on the mountain, your chances of reaching the “Roof of Africa” are very high, around 90%.

The Lemosho route is approximately 70 km/ 42 miles from gate to gate. It is designed for physically fit people with some hiking experience.