The Marangu route approaches Kilimanjaro from the south-east. It is the oldest, most well established route. and it’s Known as the “Coca-Cola” route,

Many favor the Marangu route because it is considered to be the easiest path on the mountain, given its gradual slope and direct path. , 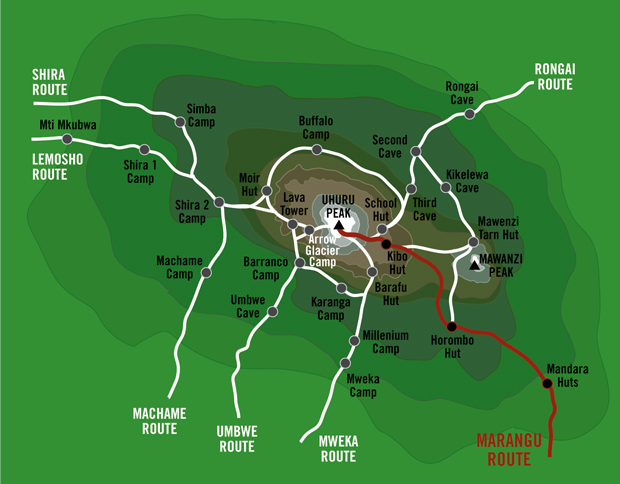 Marangu is the only route which offers sleeping huts in dormitory style accommodations. There are 60 bunk beds each at Mandara and Kibo Huts, and 120 bunk beds at Horombo Hut. ,

Guests are supplied with mattresses and pillows, but sleeping bags are still required. The huts have communal dining halls and basic washrooms, ranging from flushing toilets and running water at the lower huts to long drop toilets and buckets of water at Kibo Hut. Also available for consumption are soft drinks, bottled water, and beer.

Marangu is the easiest route on Mount Kilimanjaro. It’s ascension profile is very gradual and steady, allowing for painless trekking for most of the way. However, due to its reputation as an easy route, Marangu is often selected by unprepared, un experienced climbers. Correspondingly, only about 35% of the people actually make it to the top. ,

The trek begins in the south-east area of the mountain at Marangu Gate. The route takes five days minimum to complete, although six days is more practical and recommended. The sleeping huts along the route are structures with a dining hall and bunk beds, equipped with mattresses and pillows. The descent is done on the same path, contributing to Marangu’s overcrowded feeling. It is a cheaper climb as well, due to the close proximity of the gate to Moshi, the gateway town, and because it is a shorter route. ,

Scenically, Marangu is not a desirable route compared to all the other routes because it confines climbers to one area of the mountain, thus limiting the variety. However, Marangu has the best trail in the rainforest section of the trek. Of course, there are still great views of the Mawenzi and it’s equally spectacular for everyone at Uruhu. ,

Marangu is ideal for those who are not confident in their ability to hike over steeper paths. It’s also attractive for those who do not want to sleep in a tent. Marangu’s huts offer shelter and warmth against the weather so it is a decent choice when climbing during the rainy season. Marangu is for those who want to spend less on their climb, and do not mind crowds.