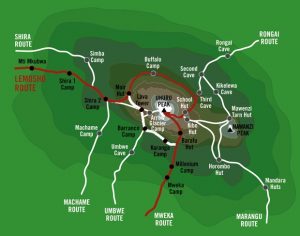 The route approaches Mount Kilimanjaro from the west, beginning with a long drive from Moshi to Londorossi Gate. From there, the first two days are spent trekking through the rainforest to Shira Ridge, before crossing the Shira Plateau. The route then heads north and circles clockwise from Moir Hut to Buffalo Camp to School Hut, before summiting from the east. Descend is made via the Mweka route.